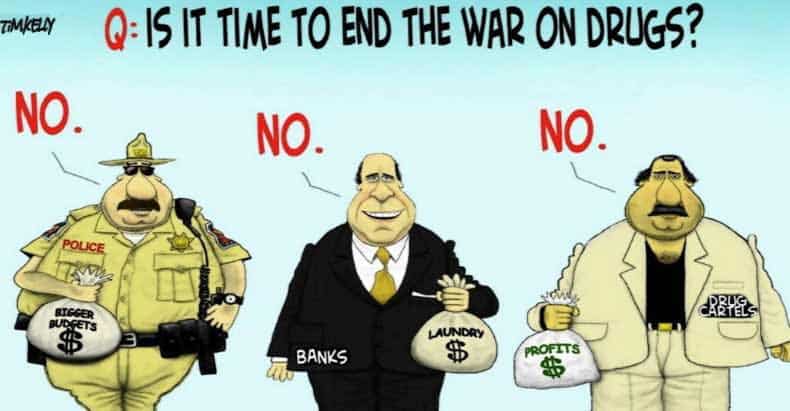 On June 18, 1971, President Richard M. Nixon declared drug abuse “public enemy number one,” and thus began America’s War on Drugs. Forty-four years has passed, making this the longest war in American history. A war that the American government declared on its own citizens.

Drug addiction is a horrific disease and it does not spare any racial, religious, or socioeconomic classes. It destroys individuals, families, and even whole communities. I don’t think anyone could disagree that its impact is vast, but yet intimate. The population of persons in this country that has not been personally affected by the disease is minuscule and gets smaller with each passing day.

So what of are forty-four year war? Our tactics have changed only in the sense that we have become more aggressive, more hardened. Our prisons spill over with non-violent drug offenders. In an era when states are cutting the budgets of various departments that provide services and community assistance, the prison and corrections budgets continue to swell fat with cash. Communities are more likely to see the erection of a new correctional facility than a new school.

Police departments are arming themselves with MRAP (mine resistance armored personnel) vehicles, military grade arms, equipment, and other death bringing goodies at a discount from the DOJ stockpile. There was an occasion many years ago when American citizens took to the streets of Boston to taunt and rail against the King’s troops that were quartered in their city. In this modern age American citizens seem to be content with quartering soldiers in their own cities and towns under the false belief that these are policing elements. Sheriff Andy Taylor has been replaced with Officer John Rambo.

Meanwhile addiction has only increased. Crime in small town America feels more prevalent. Prohibition and enforcement has not decreased the appetite of the potential user, rather it has enticed the spirit of a naturally free-thinking and rebellious populous. It seems like we tried something like this before and actually called it prohibition. The result…some of the most violent years in American Criminal History.

Every year our laws change. We increase punishment, and we attempt to convince ourselves that if we just remove “those kind of people” from our society, maybe “lock’em up” then we will sleep soundly in our beds. We give our criminal justice system tools like civil asset forfeiture, mandatory minimum sentences, and increase the restrictions on convicted felons. The divide between “US” and “THEM” continues to grow and the war rages on.

Those communities that do try to do something different, are attacked by their neighbors sometimes stifling a potential experimental solution to end this war. For example the State of Colorado decides to lift the prohibition against marijuana, only to be sued by the State of Oklahoma. The result? More schools and helpful governmental expenditures are put aside to wage war against neighbors who share a same American birthright.

There are some that will read the following and dismiss it as soft-hearted bull, those would be the war hardened, but yet some will relate and possibly sympathize. I have seen the effect of this war in many forms. I have seen its negative effect on our law enforcement. Yes, I have seen police officers lie, and hurt people, and I hate it. I have seen how families struggle, enable, beg, and then give up. There is nothing more powerful than the bond between a parent and their child, I know from personal experience how intense and unwavering that is. Yet, I have been physically present and personally observed its severance. I will not list names, but I can recall as I write this two particular occasions when I watched as that happened.

I did not interfere. I stood by. Like a documentary film maker I knew that I could not impose, that may place had been pre-ordained to that of an observer, and observe I did. I observed with stoic indifference and allowed it to take its course. I could do nothing, but let my bones absorb the crushing force of empathy and compassion I had at that moment. By that point the disease had destroyed, the options our legal system could provide, or my expertise for that matter, had been exhausted, and emotional death was the only course.

I am not a lover of vice, but then who really is? I hate the disease, but I hate the war equally. Addiction is the one disease that we punish rather than fight. Like cancer, addiction brings pain not only to the afflicted, but those that love the afflicted. Yet every year we rally, we campaign, and we donate to fight cancer. We wear ribbons, make quilts and hold touching memorials for the fallen. The addicted we separate like lepers and do our best to forget their names, we mark their graves with forgotten stones.

I love the addicted. They make me laugh, smile, and feel important. They also disappoint, infuriate, and annoy me. All of this reminds me that they are no less human than anyone else I come in contact with throughout my day.