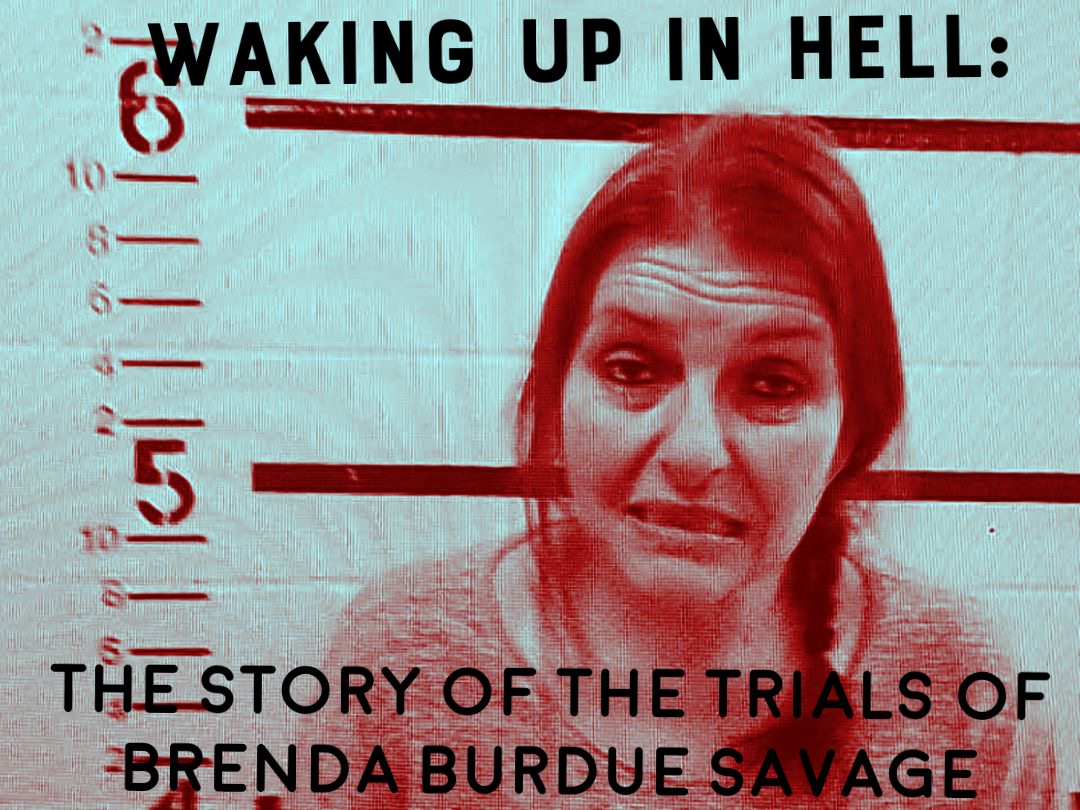 25 Aug WAKING UP IN HELL: The Story of the Trials of Brenda Burdue Savage

Part One- “The State of Oklahoma vs…”

I couldn’t believe it; they were going to quit.
I learned at a very young age that quitting was just not something I was ever going to do much of. I was always being told, and up until at least 1st Grade actually believed that “can’t” wasn’t a real word. This is because my father would never hesitate to instruct me that ‘can’t ain’t a word, cause ‘can’t’ ain’t ever done nothing for nobody”, on the rare occasion that I would utter it. Here I was sitting in a courtroom in Pittsburg County Oklahoma on the 14th of January, 2020, far removed from my childhood years, and participating in a First-Degree Murder trial. I was watching, grown-ups, attorneys working for the Pittsburg County District Attorney’s Office, get all mad and want to quit. All I could do was shake my head in disbelief
***Author’s note*** This story is told through the recollection of the author. I have tired my best to recall all of these events with accuracy. I have used transcripts, notes, reports, videos, audio recordings, interviews, and my own personal memory to piece together the events as they occurred over the course of this case. -Brecken A. Wagner
January 2020 was not that long ago, but it sure feels that way as I write this today. There was so much we all didn’t know. So many things were lined up and ready to come right at all of us, our client, this firm (Wagner & Lynch), Oklahomans, Americans, and humanity. In just a few short months the world would be changed by the Covid-19 Pandemic, an election and an aftermath that still leaves our nation divided to this day, a U.S. Supreme Court decision that would change the entire criminal justice system in Eastern Oklahoma, and so much more. As a firm we had no idea that this case would become what it did, one of the greatest trials we all have ever had the opportunity to be a part of. This is the story of the trial of Brenda Burdue Savage, a woman from Texas who was accused of shooting and killing a well known and beloved local resident named Bart Jameson of McAlester Oklahoma.
Eventually Brenda Savage would face a jury in the United States Federal District Court of Eastern Oklahoma, but you can’t tell that story without telling about how she first faced trial in the State District Court in Pittsburg County Oklahoma. It all started early on the morning of Wednesday January 30th, 2019.
Blake Lynch took Anthony Savage’s frantic call that morning. By 8 AM that morning Anthony had already called a few times and left messages, when Blake called him back, he was worried about his wife. She was being held in the Pittsburg County jail and they were telling Anthony it was for murder. That made no sense to Anthony and he couldn’t understand. Blake helped him gain his composure and then started making calls to find out what there was, if anything, to Anthony’s concerns. Blake learned quickly that in fact Anthony was right and Brenda was at the County Jail, and she was being held for murder. Blake acted quickly and before long he had already met with Brenda at the jail and was negotiating a bond recommendation with the Adam Scharn, the First Assistant District Attorney.
Blake had a good argument for a lower bond, Brenda Savage was in her fifties, had been married for over thirty years, and had never been accused of anything more serious than a minor traffic violation. The state was still claiming that their story was coming together, but that they believed Brenda had gone to the home of a man named Patrick Dunlap in the early hours of January 30th, and while there shot and killed another man, Bart Jameson with a nine-millimeter pistol that belonged to her. It was suggested to Blake at the time that Mr. Dunlap and another man, Truman Kenieutubbe, (both friends of the deceased Mr. Jameson), were present and witnessed Ms. Savage shoot Bart Jameson.

THE GOVERNMENT’S VERSION OF EVENTS (SORT OF)

IT STARTS HITTING THE FAN EARLY

Bart Jameson was well liked, and he came from a large family that was shocked to their core with grief when he died. Bart’s brothers, one of which is a twin, took the news of his death especially hard, and it wasn’t long before the stage of grief they mostly settled on was anger. We would later come to know that the anger was exacerbated by the McAlester Police Department and District Attorney Chuck Sullivan. According to a family member, when one of the brothers met with Detective Don Hass and Chuck Sullivan the morning, his brother was killed, he was told that Brenda Savage made a complete confession and that she claimed she had shot Bart just to watch him die.
Naturally the brother reported this false and extremely volatile bit of news to the rest of the family which reacted in a surge of terrible grief and anger that anyone could have seen coming. Their beloved son, brother, cousin, uncle, and friend was taken from them and just because some stranger, some sick person wanted to watch him die? As a result of this unconscionable and terrible decision to mislead this family by Sullivan and Hass, the family and their supporters took to social media with innuendos that eventually just morphed into outright threats. The family was so angry that Brenda had even been given a bond amount, let alone one that she could post. They took their displeasure to the street and protested in front of the courthouse about the low bond that was allowed for a stone-cold killer like Brenda Savage.
It became so bad that our office began collecting internet postings, threats, and discussions in the event that we would need to file a motion for change of venue (which we eventually would). With each hearing and each appearance, the rhetoric and vitriol would increase and get scarier and scarier, eventually leading to a court showdown with Blake subpoenaing the social media accounts of one of the brothers in particular.

The preliminary hearing would fist be scheduled for early June of 2019, but would have to be continued at the request of the state because of some witness issues. The hearing would take place in Mid-July, and only Patrick Dunlap and Officer McHenry would provide testimony of what happened that night.
Patrick would end up helping the defense before it was over. Blake, cross-examined Patrick and had him give as much detail as possible from what he recalled that night. Through Patrick, Blake was able to establish that Brenda was supposed to have shot Bart while standing slightly behind the couch, and in the door frame that separates the kitchen and living room where it is claimed Bart was shot. This is significant because it created yet another physical issue for the state’s story to be true.
The gun that was used to shoot Bart was a nine-millimeter handgun, and the casing is thrown from the gun to the right and behind the person shooting. This is because this is a right-handed firearm and it is designed that way. If Brenda was standing where Patrick claims she was when Bart was shot, then the shell casing should have ejected from the gun and landed either somewhere on the couch or behind it (there was a gap between it and the wall). Instead, the casing was found in the corner of the room to the left. This means the metal casing would have to have traveled back and to the right, stopped in the air and then flew the opposite direction, behind and to the left of the shooter. This created even more doubt that Brenda was the shooter; and given that the police were never able to find the bullet that killed Bart (it went through and through), or a defect in the wall or the tv he was supposedly standing in front of when he was shot, the story that Brenda had just walked into the living room raised the pistol and shot Bart to watch him die was getting more and more less likely as even a possibility of what happened. This was just one of the things that came up at the preliminary hearing, but for those that were really listening and paying attention, Blake was conducting a master class on how to get a bad story out of a bad storyteller.
The more Patrick kept talking the more inconsistencies kept coming. Truman had told officers that Brenda and Patrick were standing outside when he and Bart pulled up, Patrick testifies at the preliminary hearing that he and Brenda went inside where he first changed clothes and then they visited in the kitchen until Truman and Bart arrived. Truman told officers the gun appeared as soon as he and Bart arrived, but Patrick testifies at the hearing that Brenda and the three other men were all visiting inside in the tiny kitchen, when Brenda suddenly disappeared then reappeared minutes later with a gun.
On one of the body cameras worn by Officer Eli Hass on the night of the shooting, Patrick tells Officer Hass that Brenda unloaded the gun in the kitchen. Later that same night both Truman and Patrick claim to have unloaded the gun in the kitchen, and still later that same night Patrick tells Detective Don Hass (Eli’s father) that Bart unloaded the gun in the kitchen. This is later repeated by Truman in a written statement that is attributed to him and prepared by Detective Hass. Then, at the preliminary hearing Patrick testifies under oath that Brenda dropped the magazine and Bart unchambered the round that was in the gun.

*********We will stop here. Please look for the conclusion of WAKING UP IN HELL: The Story of the Trials of Brenda Burdue Savage