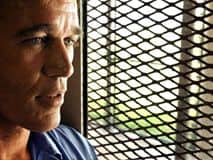 IT ALL COMES CRASHING DOWN

Billy Dillon was in the back of a locked police car in the Brevard County Courthouse parking lot. He was alone. Minutes before the detectives that had drove him to this place had exited the car, and told him someone would be there shortly to escort him in. Then they left.

Locked in the car, with no way to get out, his cool, calm demeanor was starting to disintegrate. The interior of the vehicle was closing in, the space inside the vehicle was enclosing as if all four sides were being drawn together by some horrible magnetic attraction. Eventually the car would crush itself against its own weight, like a soda can in a vacuum.

As the panic began to set in, an officer appeared, opened the door and instructed Billy to follow him. He was escorted into the building. The lack of noise, and general sign of life was disturbing, and the dimly lit hallways that became his path did nothing to alleviate the overall eerie feeling. He was escorted into a small room and told to face the mirror on the opposite wall, and grab his hair and pull it all the way over to the right.
On the other side of the glass stood John Parker, the same John Parker that met a man named “Jim” in a blood soaked T-shirt on the night of the murder.

Parker did not immediately recognize the young man looking back at him, and he told as much to the detectives that were standing beside him. However, they pressed him to look carefully. Could he be Jim? After a few minutes John Parker advised the detectives that he still wasn’t certain. Then one of the detectives picked up a phone in the room and said, “We’re here”.

A few minutes later the door opened on Billy’s side of the room. The split second of relief that Billy felt when the door opened was quickly replaced by fear. As the door opened a man and a huge German Sheppard filled the space, and charged straight at Billy.

“How does it feel to be tracked by Harass Two?”, the man holding the animal’s leash said.

The detectives next questioned Billy for several hours. When they were done, they arrested Billy, he was placed in a cell, and then charged with the first-degree murder of James Dvorak.

What little case the state had against Billy Dillon seemed to grow after he was arrested for murder. Some of it as a result of bad luck, much of it as a result of outright conspiracy. Billy couldn’t make bail and remained in jail. over the next few months he continued to talk to investigators, continually thinking they would realize their mistake and release him. On two occasions he offered to take a polygraph test. He failed both. Minor inconsistencies that arose during the hours of interviews that he had with investigators resulted in more damage to his credibility.

To make matters worse, Billy would gain witnesses against him while he was in the county jail. He shared a cell with a man named Richard Chapman. Chapman was in jail facing charges of sexual battery. The prosecutor had a good case against Chapman and he was looking at significant prison time. That was until he heard Billy Dillon confess to murdering James Dvorak.

Chapman told authorities that Dillon had confessed to him, and even demonstrated how he had killed Dvorak. Although Chapman’s reedition didn’t quite fit the physical evidence at first, investigators were able to help him remember how Billy Dillon had actually told him how it all went down. Chapman’s charges would be dropped and he would be released from custody for his cooperation. I do not know how what his victim’s response to this deal was, but I’m sure she was OK with it.

At the time of the murder Billy was in a relationship with a woman named Donna Parrish. At trial she would testify that she had gotten in a fight with Billy that night, because he didn’t have any money for drinks at the bar. She then claimed she came upon him, later that night, on the beach, standing by the dead body, covered in blood and shirtless. Her excuse for not coming forward until weeks later was because she was in love with Billy and didn’t want to get him in trouble.

Within two weeks after the trial she recanted her testimony. She even claimed that she wasn’t actually in love with Billy. She admitted that she had been having sex with Charles Slaughter, the sergeant that was working the case, and initially gathered Billy’s name as a suspect. According to Parrish, Brevard County Sheriff’s Agent Thom Fair told her that he would see her rot in jail if she didn’t testify against Billy Dillon.

The most damaging evidence presented at trial came from John Preston and his K9 partner, Harass Two. Unlike Chapman or Parrish, John Preston was more than just a cop with a special talent, he was a performer and in the late 1970s and early 1980s he made a decent living at it.

Remember the piece of paper that the detectives told Billy Dillon to go ahead and crumple up? And, then they told him to go ahead and crumple it up some more? Well, according to Preston, Harass Two wasn’t just some ordinary K9, he was a super dog. Preston testified at trial that Harass Two identified the scent from the piece of paper and that left behind on the yellow T-shirt to belong to the same person, and that person was Billy Dillon. This wasn’t the first time Harass Two had performed great feats of animal detective work with absolute precision.

John Preston was a Pennsylvania state trooper, but he would find fame as a dog handler. Preston travelled across the country with Harass Two, and claimed that his K9 had abilities that other investigative dogs did not. Harass Two could detect human traces months after a suspect had walked over the ground, or heavily trafficked streets. He even claimed that Harass Two could smell underwater. Prosecutors across the country lined up for his services and were happy to pay the $300 per day fee he charged for his services. The money he made travelling the country and assisting law enforcements agencies dwarfed his former $20,000.00 annual salary as a state trooper. So famous was Preston, he was even contracted to catch the killer in one of Oklahoma’s most gruesome, and tragic murders in the state’s history.

In 1977 his services were acquired to find the person or persons who had raped and murdered three young girls at a summer camp in Mayes County. Preston and his dog tracked the scent of the killer through the woods and across bodies of water and eventually to the killer Gene Leroy Hart.

The local Sheriff, based in some part on the representations made by Preston, declared that he was “one thousand percent” certain that Hart was guilty. Fortunately, for Hart he was represented by a young defense attorney that would become a state treasure, and the current Oklahoma Bar President, Garvin Isaacs. Isaacs tried the case to a local jury and Hart was acquitted. The case remains unsolved.

Preston would eventually, far too long after so much damage had already occurred, be disgraced. His claims began to be questioned, and Harass Two didn’t seem to perform to the standards his owner proclaimed when he was watched closely. When some would question why Harass Two would occasionally urinate on evidence, Preston would state that he was “indicating”. When one Florida judge requested that Harass Two perform in his courtroom to show his abilities before Preston could testify, Preston claimed Harass Two was not up to it on that particular day. The judge recessed and ordered that Harass Two perform the following day. Preston left town. I do not know if he returned his $300 fee for the previous day’s work.

Unfortunately for Dillon, he was not represented by Garvin Isaacs, or a competent attorney for that matter. Billy was appointed an attorney named Frank Clark (he would be disbarred in 1987 for many reasons, one among them, neglecting his clients). Clark’s courtroom performance was so absent it was shocking. He didn’t really bother to challenge any witness, or evidence, or anything really.

Completely apathetic, Clark sat next to his client at counsel table and did nothing. The prosecution proceeded without interference or question of any kind, except that which came from Billy himself. At several points during the trial Dillon would react to testimony and speak out loud, only to be chastised by the judge. His irritation at his attorney, the prosecution and the court itself came across as disrespectful, and the jury noticed.

On December 4, 1981, the jury found Billy Dillon guilty of first-degree murder. On March 12, 1982 he was sentenced to life in prison. He would spend the next 27 years in hell.