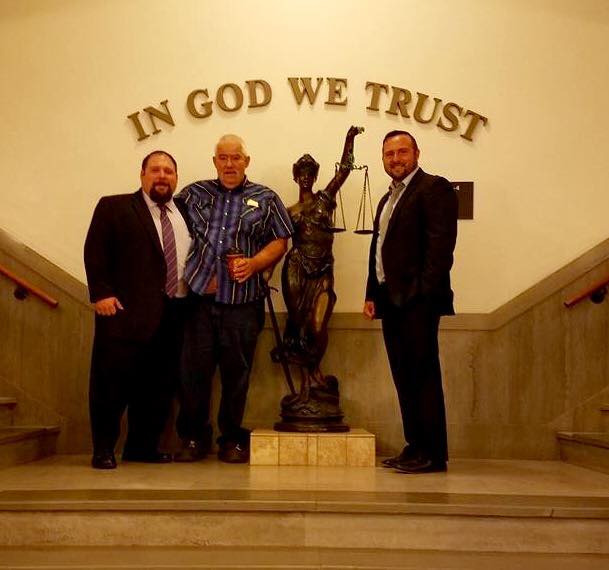 26 Nov SEX, LIES, AND A SEARCH FOR THE TRUTH The Story Of The Trial Of Michael Tadlock Part III

The next few witnesses included the apartment manager who had recovered the surveillance video that showed Michael had entered the building that day, and the first officer that arrived on the scene. The trial continued through their testimony, but not without more objections and general acrimony that had continued to inject itself into the trial.

The last witness would be Detective Frankie McClendon. Michael had lied to McClendon. The state said that he committed this act and stumbled through a lie. If he didn’t rape the accuser and they had consensual sex, why would he lie about it?

Michael was not going to testify. He couldn’t. We were going to have to tell Michael’s story in his own words through the state’s chief investigator. That was my task.

Detective Frankie McClendon is an experienced officer and he knows how to testify in court. He showed that over the course of his direct examination. In a “just the facts, ma’am” style he explained his investigation and interview of Michael.

Ms. Burns worked her way to the most important charge…Michael lied. McClendon explained how Michael first claimed to only be “friends” with the accuser. Then as the discussion went on, cracks appeared in his story, and he admitted that they had had a sexual relationship prior to that day. Eventually he confessed that they had sex on the day in question.

I began with details myself. McClendon admitted that there was no physical evidence that led to a suggestion that a rape had occurred. I pressed him on the accuser’s story and how he did not follow up with by confirming any of it. I pressed him on how the details of her story changed over the course of his investigation, yet he only spoke to her one time. He never challenged her inconsistencies. Then, I slowly began to tell Michael’s story.

I had a transcript of the interview that Detective McClendon had conducted with Michael. I worked my way through all the statements Michael had made. He provided details too, and McClendon had even checked out some of those.

Michael told McClendon that after they had sex, she ordered pizza. McClendon discovered that in fact she had, and it was her name on the receipt. This is a fact she had withheld from McClendon, yet he never went back to her and asked her why. Michael claimed that he left before the pizza got there, because his worked had called him to a job. McClendon confirmed that.

Michael had reasons to lie about having a sexual relationship with the accuser. When McClendon spoke with him he talked to him at the county jail. Michael had already been arrested and was wearing a jail issued jump suit. McClendon began their conversation by telling him he was accused of rape. The details of Michael’s story were notably accurate, but for the sexual intercourse. When Michael did admit that they had sex, he gave a detailed account. He left McClendon with opportunities to investigate and determine if Michael had been ultimately telling the truth, but the detective did none of that. He never looked for phone records that would show that the accuser had called Michael the next two days after the incident took place. He didn’t consider her history of mental illness. He didn’t do a myriad of things that you would expect in a rape investigation.

I closed my examination by offering an explanation. Detective McClendon didn’t take these steps for a reason. He didn’t complete a full investigation, because he didn’t believe the accuser himself. He wrote his report and passed it off to the District Attorney’s Office. He believed that it probably wouldn’t go this far. McClendon answered in the negative to that entire line of questioning, but I don’t believe any of the jurors were paying attention to his answers.

McClendon’s examination was not without stoppages. Ms. Burns continued her “object to everything” tactic. I could tell from the jurors to my immediate left that the constant objections were taking their toll. At one point Ms. Burns objected to a question I asked of McClendon, and I refused to approach the bench and just withdrew my question. I said, “Your Honor, I’m tired of walking up there and back, I’ll just withdraw my question. I think we all get where I’m going here.” Heads nodded to my left.

All that was left was closing argument, well and plenty of more argument outside the presence of the jury. While I took off to find a quiet place, Blake stayed behind to argue over instructions and other matters that Ms. Burns felt needed to be addressed. I told him, “keep ‘em busy,” he smiled and said, “shouldn’t be a problem.”

After about an hour and some change, the jury returned to their seats and Judge Mills began his instructions. When he was finished Ms. Burns gave her first of two closing arguments. She used the overhead projector to display a large photo of the accuser. She spoke as the figure loomed above her. In the photograph the woman was sitting in a recliner, wearing a brace that covered her torso, and had the saddest look on her face.

Ms. Burns continued to reference “the evidence”, but all she meant was the testimony of the accuser. The state had not admitted even one exhibit. The picture was a smart idea. Even though the Judge would instruct the jury not to rely on emotion, it is an impossible thing to ignore. Ms. Burns had no evidence, but she did have a very sympathetic victim, and she was certainly willing to use that. The mistake the state made was believing that we would attack this woman, and play right into their sympathetic appeal. They miscalculated.

I rose to give the closing argument for the defense. I began by acknowledging the emotional nature of the case and the accuser herself. I expressed my own sympathy. I never called her a liar. She had acted within her own nature. We accepted her for who she was. She was not the villain.

The identity of the villain was clear. Had the authorities and the district attorney’s office acknowledged who this accuser was at the very beginning they could have prevented causing her more pain, and Michael pain as well. The failure of the police investigation was immense. I argued that Detective McClendon had done more than just drop the ball, he had failed to put forth any effort to find the truth. It was obvious that he had his doubts, and for both the accuser’s and Michael’s sake he should have followed through.

I argued that the failure didn’t stop there. Ms. Burns ignored the same glaring signs and proceeded on. She was blinded by winning over searching for the truth, and the evidence of this was just shown to the jury on the overhead screen. She gave them no evidence, and by the end of the trial she couldn’t even give them the story she had promised in her opening statement. All she had provided them with was a picture. It did not advance her narrative in any way, but rather evoked an emotional response. I charged the jury. I told them that they and they alone had the power to do the one thing the police and the district attorney was unwilling to do, recognize the truth and send Michael home.

I finished by telling them how afraid I was when we had begun this trial. I felt protective of Michael and I did not want to place his fate in the hands of people I did not know. I told them how I feared that the state would rely on a sympathetic plea. I feared that the truth would be lost in this. I found myself choking on my words when I acknowledged that I was about to sit down and would not be able to protect Michael any longer. The words felt clunky and heavy.

I told them we were no longer strangers. I had come to trust them. I believed in them. I was giving them Michael, and I was putting his life in their hands. In that moment, I felt a weight literally fall off me. It was a mixture of fearful exhilaration and it was real. With nothing left, I walked back to the table and exhaled. I reached over and took Michael’s hand, he squeezed. I don’t know if he heard Ms. Burns’ second closing. I did not.

The jury left the courtroom to begin their duty. They rose from their seats, walked out of the courtroom. Their faces all held the same expression, solemnity.

When they left the courtroom, I did as well shortly after. I had warned Michael that I would probably leave and that he should know that it didn’t mean anything. After a jury receives a case I find myself in need of a silent stroll. I tend to just find a quiet place and think of absolutely nothing, Just for a few minutes.

Blake is a comforter. He stayed behind and gave Michael words of reassurance. He accepted Michael’s words of gratitude on both of our behalves and expressed to him how honored we were that he chose us to fight for his life.

Nothing much happened over the next three hours. Blake and I have experienced this wait before. We ate. We talked. We avoided discussing the trial. The wait during deliberations is both painful and comforting. It is hard to focus the mind away from the trial and trying to guess what the jurors are saying to one another. At the same time, there is a strange sense of comfort. There is a peace that comes before the outcome. In those moments, your client is free.

“Stand for the jury.”

The jurors entered the courtroom and took their seats. When the judge asked for the jury’s signed verdict, a woman in the back row passed the papers forward. She was the jury foreperson, the former police officer that questioned whether she could be fair to Michael. Blake and I kept her on the jury with the belief that she would lead the jury. The question was, which direction did she lead them in?

By keeping her on the jury we had went against all conventional wisdom, and to the surprise of both the judge and Ms. Burns. We believed in our case, we believed in our story, and in just a few short moments we were going to find out if she did as well.

“…We the jury, empaneled in the above … find the defendant…”

The words offer instant relief. I can hear Blake exhale, and when I looked to Michael tears are welling in his eyes. He takes both my hand and Blake’s and squeezes. Judge Mills began to give the jury their final instruction, and as he does Michael releases our hands and begins to write on his note pad.

I’m watching him struggle to write out a sentence. He begins to write “YOU GUYS AR AWSO… (awesome). He stops. He can’t spell the word. He scratches through the attempt and scrawls the word “Grate”.

The jury rose and left the room. We all hugged and congratulated one another. We took pictures. Blake clapped me on the back and I returned the gesture in kind. And then we left. We have more to do tomorrow.