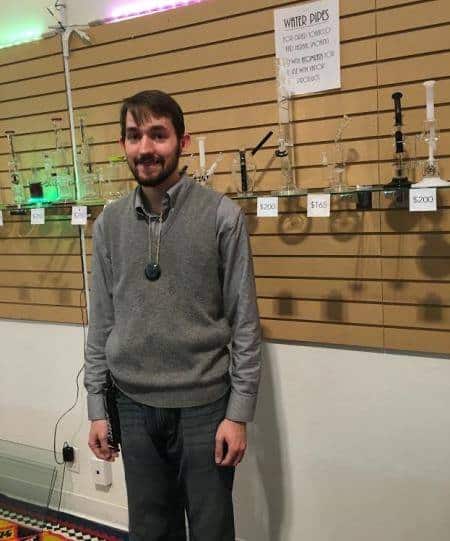 The young man pictured here is Cody Franklin. He’s a nice guy, smart, kind of funny in a dry way, and he likes to wear vests. He’s a bit of a hipster. He’s never been one to make trouble, he avoids it when at all possible. So why the post about Cody?

Well Cody is the next target in the case of The Friendly Market. The Cleveland County District Attorney’s office would like for you to believe that Cody is a criminal. That seedy element lurking in the shadows waiting. He’s of the drug element, just one step removed from roving bands of cartel members, roaming the streets of suburban America with automatic machine guns. Cody Franklin…criminal element.

Cody was a clerk at The Friendly Market, formerly located on Constitution Boulevard in Norman. What was The Friendly Market? The retirement project of Robert Cox, a long-time Norman resident and business owner. It was a little shop where you could buy tapestries, local art, handmade jewelry, furniture, and clothing and learn about veganism, Feng Shui, and holistic remedies. The store also had a tobacco license and sold glass pipes.

The Friendly Market was raided, their merchandise and their money was seized. But, something completely unpredictable happened. The owner of The Friendly Market, Robert Cox, said “no” when he was offered a sweetheart deal to just let the government keep the money, and do what they said. That’s right he said no to power. As a result, he and store manager Stephen Tyler Holman were charged with a felony. When he brought in his attorneys and fought back they charged two of the store clerks with a crime as well, misdemeanor possession of paraphernalia.

One of those clerks, Max Walters, has already been tried. You may recall him from a previous post in which we described him as our “hero”. His trial lasted three days and ended in a mistrial. The district attorney’s office plans to try it again. Cody Franklin, also a clerk will go to trial on the 1st of February, and we expect it to last three days as well.

This is really all about politics and the power of those in charge. We are going to be there fighting for Cody, another hero of ours, and for the rights of everybody to be treated fairly under the law. Yes, even when those in power purposely misread the law to push some political agenda. The trial is open to the public and will take place in Judge Tupper’s courtroom beginning at 9:00 A.M.