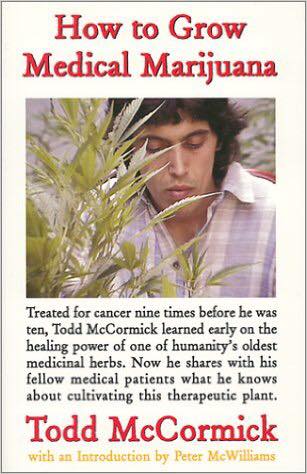 17 Dec KILLING IN THE NAME OF JUSTICE? The Story of Todd McCormick and Peter McWilliams

Posted at 18:32h in Wagner & Lynch Blog by Brecken Wagner 0 Comments
1 Like

Todd McCormick smoked his first joint at the age of nine years old. It was his mother that gave it to him, and she did so in hopes that it would save his life. What she didn’t know was that it would not only save her son’s life, but that he would go on to become one of the most prominent marijuana activists in the United States and his research would lead to saving the lives of countless others.

Eventually he would meet and befriend a man named Peter McWilliams. It was McWilliams, a best-selling author, that would assist McCormick in writing a “how-to” book for growing the marijuana that saved his life and the life of McWilliams. The federal government through the ignorance of federal prosecutors and a federal judge, all in an effort to sustain America’s “War on Drugs”, would kill McWilliams.

At the age of two years old, Todd McCormick was diagnosed with cancer. Between the ages of two and ten, Todd would be diagnosed with nine different tumors in all, and treated with a combination of radiation therapy, chemotherapy, and surgery. Todd spent his childhood in the hospital surrounded by other child patients. He spent the first years of his life making friends, and playing like any other adolescent boy, but his friends might be there to play “trucks” or “legos” one day, and gone the next.

During his eighth bout of treatment his mother decided to try something different to help her son. The life saving treatment Todd was receiving for his cancer was killing him at the same time. Todd, like most of the other children on the ward was suffering from malnutrition. The radiation was killing the cancer cells, that was the good news, but the nausea from the intense treatment kept Todd from eating and he become weak and sick. His mother read an article in “Good Housekeeping” magazine about how some cancer patients were using marijuana to battle this deadly side effect. After a radiation therapy, she gave her nine year-old son a joint.

Todd’s nausea subsided. He ate. Even more, his spirits lifted and his depressive state improved. Todd would thrive in his eighth therapy and his ninth as well for that matter. His mother had saved him. Todd’s mother was pleased with how Todd was was progressing, but she could do nothing but watch as other children on the ward, suffered, and in many cases died. She desperately wanted to tell the other mothers what Todd’s secret to success was, but she knew the risk. If it got out that she was giving her adolescent son marijuana, even if it was saving his life, he would be taken from her and certainly wouldn’t be given the marijuana that he needed. She remained silent, as other beautiful, innocent children like her Todd, wasted away to a cruel and painful death.

Todd would survive, and he credited marijuana with saving his life. Although he would live without cancer, he would still struggle with pain. As a result of therapy and surgery he would have fused vertebrae in his neck and one of his hips would forever be deformed. Todd’s mother did what she had to by not telling the other mothers about Todd’s special treatment, but Todd wanted to make sure other mothers would never have to suffer in silence again.

Todd immersed himself in the study of cannabis cultivation, breeding, and effects of certain strains. He made it his life’s work and his research and dedication would play an integral part in the medical marijuana movement, a movement that would eventually lead to the passage of California’s Prop 215. Prop 215 exempted patients and caregivers from possession and cultivation laws when a doctor had recommended marijuana. Todd could legally grow and experiment in his own home safely and under the protection of state law, which he did.

Peter McWilliams was the best selling author of “Ain’t Nobody’s Business If You Do: The Absurdity of Consensual Crimes In Our Society”. He was the author of nearly forty other books, a published poet, and photographer. Peter McWilliams also suffered from AIDS and Non-Hogkins Lymphoma. He actively supported the passage of Prop 215 and used marijuana to assist him in keeping down the live saving medications he needed to take to keep him alive.

He befriended Todd McCormick and visited Todd at his Bel-Air home that resembled an odd stucco castle. Peter called it the ugliest home in Los Angeles, but it was at this ugly home that Todd conducted what Peter believed was revolutionary, life-saving research.

Todd grew his plants both inside and outside the home in open view of anyone who might pass by, and protected by Prop 215. Peter thought that Todd’s research should be available to the masses and the two decided that Todd would write a book, Peter would publish the book and give Todd an advance.

Todd and Peter hoped to revolutionize the treatment of cancer and other devastating diseases that was not only killing their friends, but had nearly killed themselves as well. They even had the support of the state of California, what could stop them?

There was an enemy. It was out there. Lurking in the shadows, listening to their phone calls, tracking their movements, and going through their trash. This enemy had a lot to loose, too. For all of Todd and Peter’s efforts to tout the life-saving qualities of marijuana, their enemy had invested years, billions of dollars, and killed, all in an effort to demonize the same plant. The Federal Government did not care that marijuana had saved the life of Todd and was keeping Peter alive, and it wouldn’t care when it’s actions eventually murdered Peter.

Prop 215 didn’t mean anything to the DEA and President Clinton’s justice department. Since it’s inception, the “War on Drugs” has been good for the business of politics. Economy is bad…blame drugs, popularity rating is slipping…go after some drug dealers, foreign policy is failing…must be international drug criminals. The prohibition and demonizing of marijuana did not happen overnight, and as the times have changed so has the rhetoric. In the course of recent American history marijuana use has been portrayed as the homicidal induced craziness of the “reeves madness” years, through the counter-cultural and revolutionary and violent acts of the 60s and 70s, to the cartel violence of the 80s and 90s.

As the medical marijuana movement has advanced, the federal government has resisted. The reason is quite simple, too much is at stake. The governments not very good at saying it was fundamentally wrong about something (see, slavery), but more than that, thousands are currently in prisons and countless others have died for the “War on Drugs” and we are not even talking about the money yet.

On July 23, 1997, just months after Prop 215 has passed the previous November, nearly 100 agents arrived at Todd McCormick’s Bel-Air home. McCormick was indicted for cultivating and possessing marijuana with the intent to distribute under federal law. Peter McWilliams was also indicted for giving McCormick money that the Feds said was for McCormick’s marijuana distribution business. The truth is that McWilliams had given McCormick money, but it was for a book advance, one that Todd would eventually go on to write called, “How to Grow Medical Marijuana”.

Some of Todd’s friends and supporters came to his aid. Actor Woody Harrelson put up half of his bond, and Larry Flynt’s attorney agreed to represent him. Peter’s mother and brother put up their homes as bond and he was also released to await trial. One of the conditions of his bond was that he not use marijuana and would be subjected to weekly drug tests. He obeyed the judge’s order, had he disobeyed his mother and brother would have lost their homes. His viral load, which had fallen to very low levels, began to soar.

“Unable to keep down the life-saving prescription medications, by November 1998, four months after my arrest, my viral load soared to more than 256,000. In 1996 when my viral load was only 12,500, I had already developed an AIDS-related cancer …. Even so, the government would not yield. It continued to urine test me. If marijuana were found in my system, my mother and brother would lose their homes and I would be returned to prison” said Peter.

Peter was able, through experimentation and regimen, to find ways to keep his medication down for nearly an hour and a half without using marijuana. However, the process weakened him to the point he was bound to a wheelchair.

Despite his publishing business ruined and his assets gone, Peter did manage to focus his energy on his upcoming trial. He could not wait for the opportunity to tell the jury of his journey, his illness, and the amazing things that Todd McCormick and marijuana had done for him and could do for countless others.

Then in November of 1999 came devastating news. The presiding federal judge in Todd and Peter’s case would not allow any testimony about the medical benefits of marijuana. Peter’s story would never be heard at his trial. In the end the government through its judge would protect what was most sacred, the lie. Todd and Peter would be tried as the “drug criminals”, the government’s LIE needed them to be. The freedom of a few, the health of more, and the truth would be sacrificed for the political necessity of a false narrative now decades into its existence.

Peter, hopeless, decided he had no choice, but to plea bargain. He hoped that he may be sentenced to his own home and avoid prison. On June 14, 2000, Peter’s housekeeper, Natalie Fischer, discovered Peter. He had died choking to death on his own vomit, his regimen ultimately failing him.

The Conservative writer and founder of The National Review, William F. Buckley, eulogized Peter in a publication. (You can read it in its entirety here: http://www.mapinc.org/drugnews/v00/n948/a03.html). In it he wrote, “I must admit that when I learned the tragic news of Peter’s death, my spirit was not so generous as his. I thought about the judge who had denied him his day in court and had ordered him to forgo the medication that kept him alive. I suppose he’s happy, I said to myself, now that he’s murdered Peter.”

While out on bond, Todd traveled the country speaking out against his government oppressors. He spoke from the west stage at Woodstock ’99. He finished the project that he and Peter had started, and “How to Grow Medical Marijuana” was published and has been free on the internet since 1998. He would be sentenced to 5 years in prison by the same judge that murdered Peter, and since his release continues to be active in the advancement against the prohibition of marijuana and the “War on Drugs” to this day.

There has been a lot of change in the legalization of marijuana in the last few years. In the most recent election several states passed laws to allow medical marijuana and some, like California decriminalized it all together. The federal government still continues its war against the American people. Prosecutors, law enforcement officers, government agents, and too many judges and politicians still accept murder as acceptable collateral damage in their phony “War on Drugs”. Our prisons still teem with non-violent addicts and many sick and dying men, women, and children are denied responsible care and research. I hope we can reach a consensus some day that people shouldn’t choke to death on their own vomit to advance someone else’s campaign narrative.