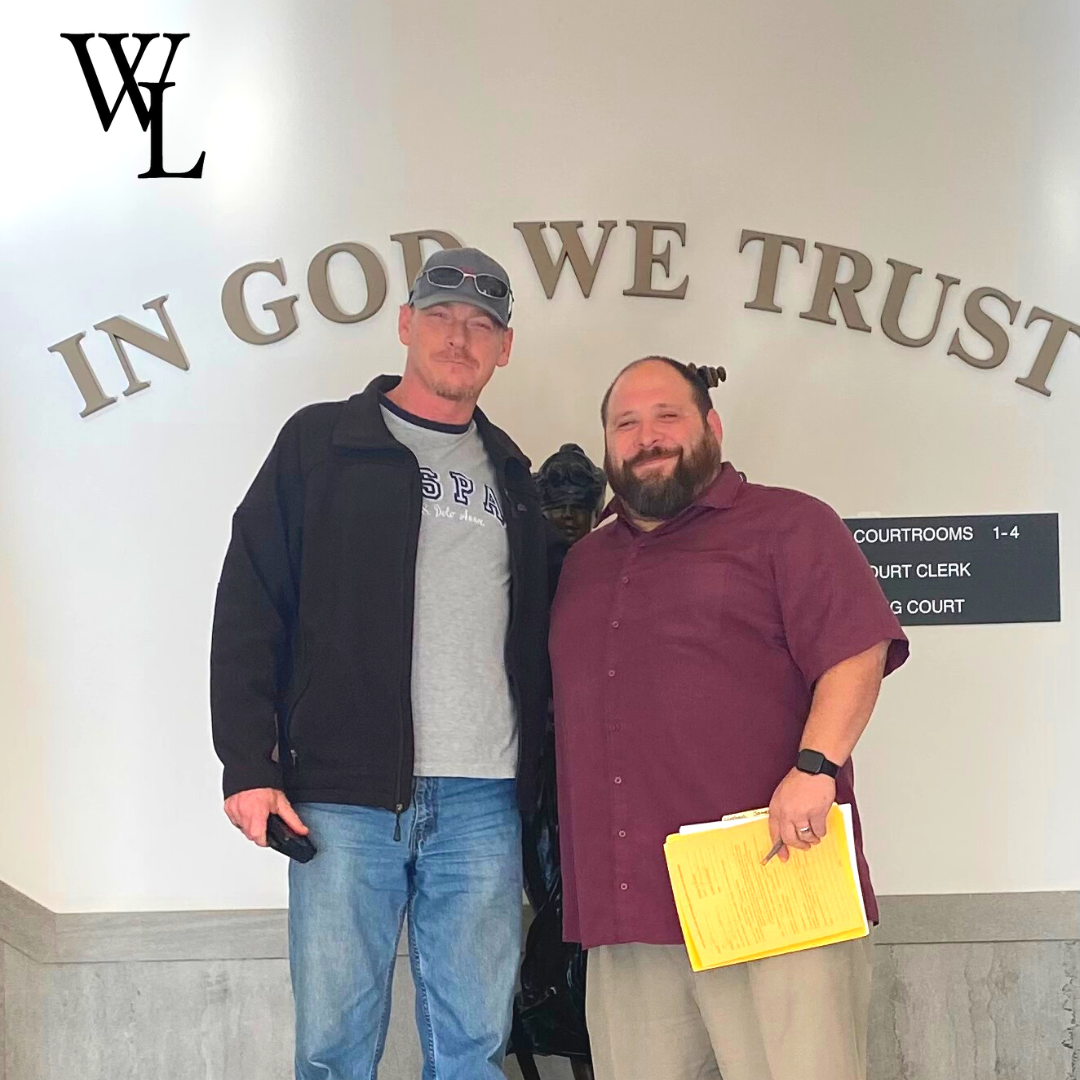 Today James Stephens (pictured here with Brecken) left the Pittsburg County Courthouse without anything hanging over his head. Prior to today Mr. Stephens was facing prosecution for one count of Obstruction an Officer and Resisting Arrest.
On the 19th of October Mr. Stephens was in his home and not bothering anyone, when a McAlester Animal Control officer beat on the side of his home. Mr. Stephens came to the door and was asked about an animal that may have been involved in a biting incident earlier that day. Mr. Stephens, somewhat irritated that the officer beat on the side of his house rather than just knocking on his door, informed the officer that the owner of the animal lived next door, where the animal also resided. When asked to answer more questions he refused and shut his door. The Animal Control officer immediately called McAlester Police Department. He would eventually be arrested and charged with obstruction and resisting.
On hiring Wagner & Lynch, Brecken immediately requested the body camera footage from that day. What was contained in the video was appalling to say the least, and it is our intention to release it in the near future.

Officers Tucker Curry and Warner Bedford arrive on scene first. As Officer Bedford is approaching the house, he spits a glob of chewing tobacco on Mr. Stephens property. You next see Mr. Stephens open the door before Officer Curry can knock and ask, “Ok, who did that? Who spit?”. When Officer Bedford admits that he is the one that did, Mr. Stephens orders him to leave from his property. Officer Curry begins asking Mr. Stephens about the animal that belongs to a neighbor. Mr. Stephens tells the officers that, “No”, he will not speak with them, they acknowledge this with and “Ok”, and he begins to close his door.
It is at this point both officers force their way into his home, fight with him, grab him and drag him out of his home. They next slam him on a vehicle in the yard and begin to wrench his hands, which are behind his back, up behind his head in a clear effort to cause him pain. The officers continue to tell Mr. Stephens to stop resisting when they are the only ones making movement.
Brecken showed the video footage to the District Attorney’s office because at the time of filing they only had the officer’s sworn affidavit as to what occurred, and not the video footage of exactly what happened. Based upon their review of that footage, and the case overall, the Pittsburg County District Attorney’s office dismissed this matter today with the notation “In the interest of justice” written into the court’s order.
Today was surely a day of relief and maybe even a little happiness for Mr. Stephens, but his road has been difficult and there is no reason to think it won’t remain so in the foreseeable future. The psychological effect from men forcing their way into your home, and dragging you out by force, only to throw you in a cage, is more than scary, it damages people. Add to that, the person was within their right. You can say “No!”. Then, the damage is surely only exacerbated.

Even today after securing his dismissal Mr. Stephens said that he was afraid to be in his own home. Imagine being in your home and enduring the torture of thinking that at any moment some government agents could show up, and drag you away to jail. He lives with those frightening thoughts every day since this happened, because the day it did happen was the first time Mr. Stephens ever thought something like that could happen.
Wagner & Lynch is still investigating this matter, and if you believe that you may have any relevant information about this incident or those involved, please contact our office and someone will take that information from you.
We need reform.