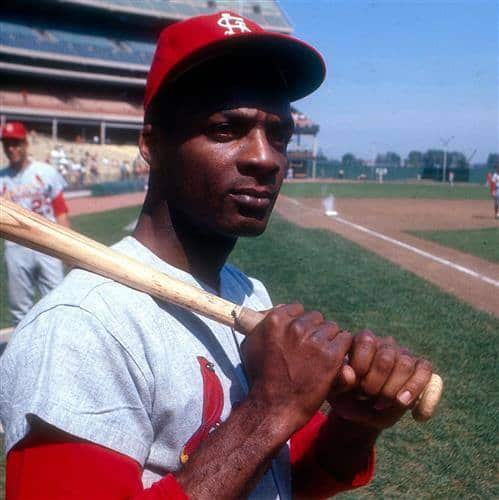 06 Mar AS AMERICAN AS BASEBALL, APPLE PIE, AND SOCIAL JUSTICE: How Curt Flood Gave Up His Career to Stand on His Principle

Take Me Out To The Ball Game…

It was a Saturday afternoon game. It was hot, kinda of sticky. The air was thick with the smells of smoked meats, roasted peanuts, spilled beer, and freshly raked dirt. I did and still do bleed Cardinal red, but my dad was given tickets to a Royals game and invited me to go with him.

To me it would never have mattered who was playing, or where the game was being played, if the game was baseball, and my Pop was the one taking me. I was either ten or eleven years old that summer, exactly what day, I can’t quite remember, but what happened, I will never forget. I’d attended quite a few pro baseball games with my dad, most of them at Busch Stadium, but we had never sat in seats like this.

We were in the second row of seats right behind home plate, in Kaufman Stadium, Kansas City, Missouri. When the usher finally led us down to our seats I could do nothing but look around, mouth agape, in absolute wonderment. When I did finally speak, I told my dad, “Mom can probably see us on TV from here!”

I don’t remember the score, but I do remember the Royals won that day. A Cardinals fan, I politely cheered for them based upon our shared Missourianhood. When Number 16 came to the plate for the first time I could not resist being excited. Bo Jackson was a physical freak of nature. He approached the batter’s box in a glide, he didn’t even walk like a regular human being.

First, he pawed at the dirt with his left foot, stepped back and did the same with his right, stepped back again and beat the dirt from his cleats with the butt of his bat. He stepped into the box and planted himself like a statue. He was so close. I could see his chest deflate and then inflate as he raised his bat. The ball left the pitcher’s hand and floated toward home plate as if in a vacuum. Being so close, I heard the deafening crack of the bat at the same time I saw the contact.

It was gone. Not only did the ball rise skyward as if shot from a cannon, it appeared as if it would never come down. It took a straight trajectory to left-center field finally coming to rest in the grass just to the left of the fountains. I cheered. I will never forget that moment.

I love baseball. I come by it honestly, being raised to love baseball. Some of my fondest memories are of sitting in my Aunt Mary’s house on Main Street listening to Jack Buck and Mike Shannon call a game on a lazy Saturday afternoon. My aunt was a Catholic nun, and she would tell you that her first love was Jesus and the St. Louis Cardinals were a very close second.

Baseball season is almost here, and I figured why not tell a story about law and baseball, and to make it even better, an outfielder for the St. Louis Cardinals.

BASEBALL WAS SOCIALLY RELEVANT, AND SO WAS MY REBELLION AGAINST IT. -Curt Flood

Curt Flood was a good baseball player. He began his Major-League career with the Cincinnati Redlegs in 1956 before landing in St. Louis to play for the Cardinals in 1958. He won the Gold Glove award seven consecutive seasons, played on three pennant winning Cardinal teams, and collected two World Series rings. At the end of the 1969 season the Cardinals traded him to Philadelphia.
Flood refused to go to Philadelphia. Instead he went to his lawyer and then to the director of the Players Association, and informed them that he wanted to sue Major League Baseball…

In 1969, players were still bound to a team under the “reserve clause”. Essentially the reserve clause allowed the team owners to treat the players as property, and a player was bound to that team for life unless he was traded or released. Under the reserve clause a player could not contract under his own authority, and was reduced to a form of servitude, retirement being his only recourse. It’s a lot like how Universities treat student athletes today, only the schools are further protected from having to pay their indentured servants by the corrupt NCAA (National College Athletics Association).

Curt Flood was a proud man and he had experienced unfairness before in his life, and knew that his only option was to seek redress through the courts. At 26, Flood a native of Houston, Texas, rented a home in the suburb of Alamo. He had signed the lease and went to the home with his pregnant wife and four small children. When he got there, he was barred from entering by the owner who was armed with a shotgun. It wasn’t until after Flood had signed the lease, that the owner had discovered that he was a black man. Just prior to signing the lease he was in St. Louis being crowned a World Series Champion in 1964.

Curt Flood could have walked away from that house in Alamo, Texas, just as he could have swallowed his pride and taken the field in Philadelphia, but Curt Flood wasn’t the pride-swallowing type. He filed his lawsuit, and without the support of most of his peers. Only two players, both retired, appeared to testify at his trial, Jackie Robinson and Hank Greenburg. Curt Flood was standing up for all the current players in the major leagues, but none were strong enough to stand with him. Afraid of retaliation from the owners, no active players came to testify or even publicly endorse Flood.

The case would go all the way to the Supreme Court of the United States, and Curt Flood would lose in a 5-3 decision. The court did say that Flood should be allowed to be a free agent, but only Congress could remove the antitrust exemption that allowed the reserve clause to remain in effect.

By the time of the decision in 1972, Curt Flood was out of baseball. While the case was pending, he was traded to the Washington Senators, and played in the 1971 season after sitting out all of the 1970 season. Congress did pass a measure to remove the antitrust exemption and even named the bill after Curt Flood, who would never see the chance to benefit from it. Because of the act, free agency exists today, and scores of players have had the opportunity to play their entire career as humans rather than chattel.

Curt Flood did lead a bit of a tragic existence. He was a heavy drinker and by the time of his retirement a serious alcoholic. After the supreme court ruling he was bombarded with death threats and left the country to open a bar in Majorca, Spain. He went through a few marriages, and was constantly plagued with debt and unpaid child support. He acknowledged that he was a bad father and a heavy drinker. He began to slowly turn things around after a stint in a Barcelona psychiatric hospital and marrying a long-time girlfriend, Judy Pace.

Just like his bid to reestablish a relationship with his children, recognition would eventually come. In 1992 he was given the NAACP Jackie Robinson award for contributions to black athletes. Even his former team, the St. Louis Cardinals would elect him to their Hall of Fame in 2015 posthumously. He died in 1995 of pneumonia after being diagnosed and treated for throat cancer.

To me the fact that Curt Flood played Major League Baseball and that he did it for two World-Series Champion Cardinals teams is enough to make him a hero. However, Flood was more than just an amazing and skilled athlete, he was a man that stood on principle even when it wasn’t popular to do so.

A trial lawyer is someone who stands in battle on behalf of another. Against all odds, and at times against the system, the trial lawyer must fight, scratch and claw. What goes unsaid is that there is no such thing as a trial lawyer without the brave men and women that decide to fight in the first place. It’s people like Curt Flood and every person I’ve ever had the honor of representing that creates the trial lawyer. The glory, and the accolades should always rest on those brave enough to demand justice in the first place. I thank my Dad and my Aunt for raising me to love the sport of baseball, I thank God for men and women that show us what bravery really is, people like Curt Flood.