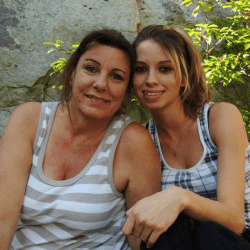 04 Jun THE STIPPLING EFFECT: The Story of a Mother and Daughter Wrongfully Accused of Murder Part II

Weathington was represented by a court-appointed attorney named John Rife. Cash hired an attorney and paid him a lot of money, but he would end up withdrawing due to a conflict. This left Cash with little money to afford different counsel, but she did find an attorney willing to take her case for a reduced fee, his name was Thomas Ford.

Because Weathington was represented through court appointed counsel, an investigator was funded and assigned to the case. Although the investigator was assigned to Rife, he had significant contact with Thomas Ford because the two women were going to be eventually tried together. During the months leading up to the trial the investigator began to wonder if Ford was in over his head. Cash had complained that Ford wouldn’t take her calls, and his behavior seemed bazaar at times.

As trial approached and the attorneys began to prepare their cases, the government still had a major issue with their case. The most glaring problem was the lack of any motive. The government had gotten into gear and began to create a case against the two women after Eisenstat had concluded that Jones’s death was a homicide. However, they were in desperate need of a motive, so they looked a little more closely at the three parties involved. The government was eventually able to weave together the loose makings of a motive. Loose, being the appropriate word. If anyone would prod or question the government’s theory very much at all, it would become obvious that they had created more of a house of cards than a true foundation for a motive for murder.

Jones and Cash had been friends since they were teenagers, and at one point had even lived together for three years. Their cohabitation ended when Jones moved out of Cash’s house after a disagreement. It would come out that prior to the shooting there was a perhaps the largest rift between Cash and Jones that had ever existed between them. This rift was in large part due to the fact that Jones was dating Cash’s daughter, and the twenty plus year difference between them in age. Cash did not approve of the relationship, but she did not refuse Jones to come in her home and on the day of his death, he had been mowing Cash’s lawn as a favor to her. It was well known that Cash did not approve of her daughter seeing Jones, but there was no evidence that she wished Jones any harm because of it. The state merely exploited the existence of a rift to set the groundwork for a murder prosecution.

The government must have known how flimsy their theory of motive was, because they spent most of the trial focused on forensic evidence and trying to prove that the shooting could not have been an accident. Remember the government was accusing Cash of killing Jones and that Weathington had been a part of that as well. Why would Weathington help her mother kill Jones? Why would she be complicit with it in any way? Why weren’t these major points of emphasis for the defense?

The behavior of both of the attorneys in this case, especially Thomas Ford would become a major issue for the appellate courts after the trial had concluded. On the first day of trial (October 14, 2013), Cash’s ex-husband had come into the courtroom during jury selection. Cash told Ford that she objected to his presence, and Ford responded, “Shut, the fuck up, bitch.” Ford’s conduct during the trial became more erratic and stranger from there. He cursed so much that the jurors approached the bailiff during a break and asked that something be said to Judge James Osborne to make him stop. At one point during the trial he mocked the voice of a witness that had throat cancer. He appeared to fall asleep at the counsel table on several occasions and didn’t have so much as a file with him, instead he appeared to borrow materials from his co-counsel, Rife.

Eisenstat was a crucial witness for the government. In addition to testifying about the lack of stippling around the bullet wound he would also testify that the blood spatter on Jones hands was from his head-wound and proved that he could not have been holding the gun at the time in order for there to be spatter on his hands.

According to the Government’s witness, the gun had to have been fired from the hip at a distance of about two feet. This would have been a nearly impossible shot. Rife had hired a ballistics expert to produce a report that was favorable to the women, but the expert was never called to testify. In the end neither Rife nor Ford would call any witnesses.

The government didn’t seem to have much going for them either. In closing arguments, District Attorney Donald Donovan would say he was stumped on the series of events. He said, “I also cannot explain how Donny Jones’ hat got bullet in it. But you know what? I don’t have to explain it.” In that he would be correct, because Rife and Ford were more committed to acting strangely than to question the State’s evidence. During the defense’s closing arguments, Ford would theatrically destroy a packet of DVDs that he claimed contained some of the state’s evidence. Then he put on Jones’s hat, which had been admitted into evidence, and pretended to summon the dead man from the grave and speak to Cash. The result was an uncomfortable feeling throughout the courtroom. Donovan, in his rebuttal would remind the jury that this was a serious matter and a serious crime.

Elergie Cash and Jennifer Weathington were found guilty on October 25, 2013, on all charges and each was sentenced to life in prison. The jurors, upon being dismissed by the court, were said to have run out of the building in an effort to avoid contact with Ford.

Cash and Weathington quickly filed a motion for new trial based upon ineffective assistance of counsel and insufficient evidence. The hearing was held over the 12th and 13th of May, 2014. The women were now represented by new counsel and they were able to show the court all of the evidence and expert analysis that was available to the women at trial, but their attorneys refused to call any witnesses. The behavior of Thomas Ford was also a major point of analysis for the court. Both Rife and Ford were called to testify and their behavior was sharply examined by Cash and Weathington’s new attorneys.

Another major issue on the motion for new trial was the testimony of Dr. Carol Terry. Dr. Terry, a forensic pathologist, was brought in to refute Eisenstat’s findings. She testified that the lack of stippling that led to the original finding of a homicide was easily explained, especially when Jones’s hat was examined. She would testify that the physical evidence pointed to a self-inflicted gunshot wound while Jones was wearing a hat. She would also testify that the spatter on Jones’s hands was consistent with spray of blood from the mouth and Jones lay dying.

On May 13th the judge hearing the motion ordered a new trial. He said the convictions were “contrary to the interests of justice and equity” and that both women received ineffective assistance of counsel. Both of the women were released on bond pending the new trial.

The retrial would begin in April of 2019 and this time the defense called witnesses and the attorneys for the women did a proper job of attacking the government’s case. The evidence and lack of any motive would be too much for the state to overcome and on May 1, 2019, a jury acquitted both women on all counts.

Thomas Ford was disciplined by the Georgia State Bar; he received a public reprimand. He fully cooperated with the actions taken against him by the bar and accepted his punishment. He claimed that he had taken on Ms. Cash and quickly gotten in over his head. He also claimed to have been going through a difficult time in his life, a terrible divorce, and he expressed great remorse for his actions. It was due to his remorse and previous years of having a reputation as a good and upstanding attorney that would serve as the main reason for his punishment not exceeding that of a reprimand.

For me it’s quite simple. I appreciate that Mr. Ford made some terrible mistakes and so did Mr. Rife. Mistakes that the court believed were egregious enough that the court concluded the convictions were not just. However, that’s not the only reason this court reversed. The true betrayal here does not fully lie with the first round of defense attorneys. The failure here occurred when one single member of the government team went out on a limb and made a finding that was not based in good science or police work. What resulted was a lot of good people putting their training and instinct aside in order to refocus their efforts to create the makings of a criminal act when there never was one. This is where our criminal justice system has a major flaw.

There is a procedure in place to deal with the things that Mr. Ford did. The bar association stepped in and disciplined Ford publicly. This is a form of both punishment and a public showing that this behavior is not tolerated. What about the other side? Well that is the issue. The prosecutors, officers, and medical examiners that work for the government are all protected by immunity. Their behavior was just as contrary to the interests of justice and equity as Ford and Rife, but they can all hide behind the blanket of immunity. In order to be held accountable, in most states, it would have to be proven that those people acted with some “good faith”. In other words, being negligent or lazy or any of those things is acceptable if you are the government, just as long as nobody can prove that you acted with malice.

Would you like to see change to this archaic way of thinking? Shouldn’t every lawyer, judge, law enforcement officer, lab tech, and any other person that can be the factor in whether a man or woman is accused of a crime, be held liable for their work? I would invite you to stay tuned in to what we are doing at Wagner & Lynch. Be on the look out for our “Advance Justice” campaign. We are actively trying to put together real, substantial criminal justice reform measures to send to the Oklahoma legislature and we are looking forward to your help in doing it. Keep an eye out for changes coming to our social media pages and website for more information.